A commemorative postage stamp on the Golden Jubilee of the India National Army (Azad Hind Fauj) : 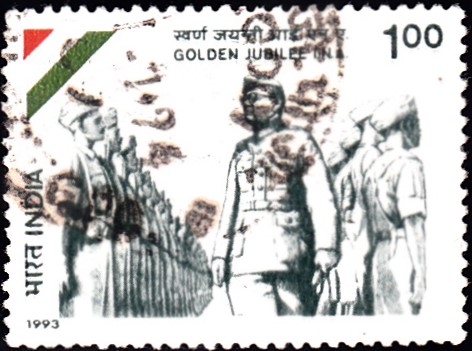 Issued for : The Department of Posts has the proud privilege of honouring India‘s great heroes who have made the advent of a free India possible. Two postage stamps have earlier been issued to commemorate the 67th birth anniversary of Netaji Subhas Chandra Bose in January 1964. With the present release, the Department salutes the India National Army for its glorious contribution to India’s prestige and honour.

Design : The stamp design by the artist Shri Shankha Samantha is based on photographs of Subhas Chandra Bose reviewing the troops of the Indian National Army.