Complete set of 2 nos. of commemorative postage stamp on the 20th Anniversary of WHO (World Health Organisation) : 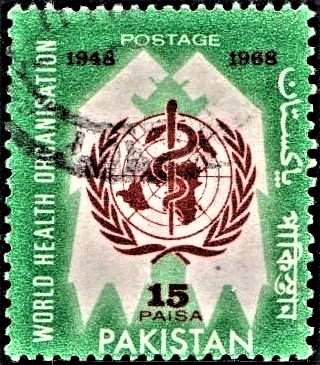 Issued for : During its thirty-ninth session – seventeenth meeting, January 26, 1987 – the Executive Board of the World Health Organisation decided to celebrate the whole of 1968 as the twentieth anniversary of the Organization. Pakistan, along with a number of other countries, is issuing two postage stamps of 15 Paisa and 50 Paisa denominations on April 7, 1968 to commemorate the occasion.

Design : The format of the stamp is rectangular. The emblem of the “World Health Organization” is shown in the centre. Two images of doctors in abstract form in silhouette are shown in reverse. The background in respect of 15 Paisa postage stamp is green and orange in respect of 50 Paisa postage stamp which is bleeding upto perforation. The wording “World Health Organization” appears vertically on the left side of the stamp. “Pakistan” in Urdu and Bengali is printed vertically on the right side whereas the word “Postage” is printed on top and “Pakistan” at bottom in English. The year 1948 and 1968 appear on either side of figures on top left and right. The denomination is just below the emblem in between the legs of silhouetted forms.