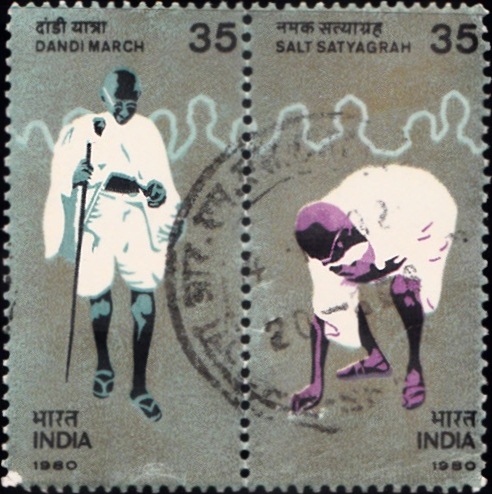 Issued for : Indian Posts and Telegraphs Department feels honoured to pay homage to the Father of our Nation by issuing a set of two se–tenant stamps.

Description of Designs : The se-tenant set of two stamps depicts Gandhiji marching to Dandi and defying the Salt law by picking up a handful of salt at Dandi. The first day cover designed by Charanjit Lal shows the facsimile of Gandhiji‘s message to the world together with artist’s impression of Gandhiji‘s marching feet against the background of a crowd scene symbolising nation’s solidarity with the Mahatma‘s March. First day cancellation has the profile of Mahatma Gandhi with the inscriptions in Hindi and English.

Designed by : A. Ramachandran