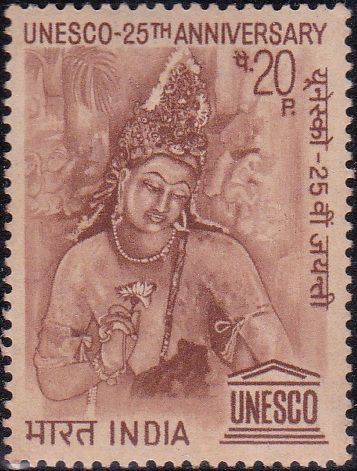 Issued for : India is one of the Founder–Members of the UNESCO and is actively participating in the world-wide celebrations of the 25th Anniversary of the founding of the UNESCO. The Indian P&T Department are privileged to be associated with these celebrations on the occasion of the 25th Anniversary of UNESCO. The commemorative stamp being brought out on the occasion, in India depicts a painting in the Ajanta Caves, where a UNESCO project for preservation of these paintings is in progress.

Description of Design : The design of the stamp is vertical and depicts a painting in the Ajanta Caves. The symbol of UNESCO is also shown at the bottom right hand corner.