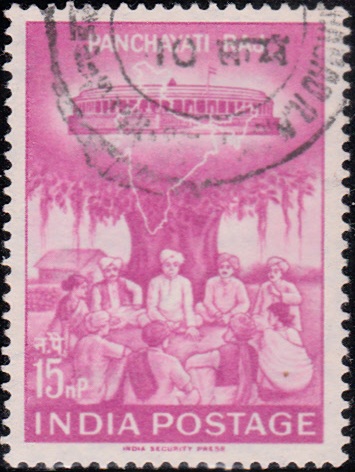 Issued for : The Posts and Telegraphs Department marked the progress made by this national movement by the issue of a special postage stamp on republic day 1962.

Design : The stamp symbolises the basic philosophy and aims of Panchayati Raj. It shows a Panchayat meeting being conducted under a banyan tree, which typifies rural life in India. Above the trunk and the branches of the tree is shown the Parliament House with the national flag hoisted on it. An outline of the map of India is shown in the upper half of the stamp over-lapping Parliament House and banyan tree.